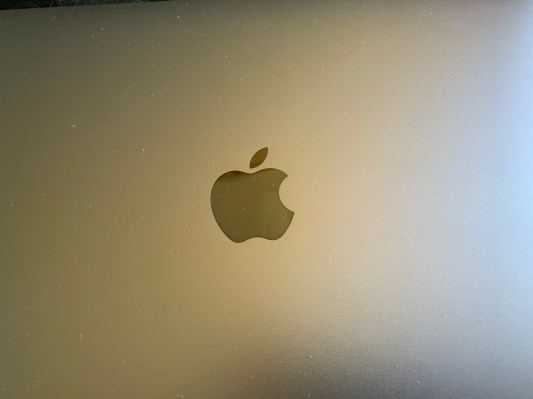 When Apple confirmed it had acquired Fleetsmith, a mobile device management vendor, on Wednesday, it seemed like a straightforward purchase, but Fleetsmith customers quickly learned a key piece of functionality had stopped working  — and many weren’t happy about it.

Apple systems administrators began complaining on social media on the morning of the acquisition announcement that the company was no longer allowing them to connect to third-party applications.

“Primarily Fleetsmith maintained a third-party app catalog, so you could deploy things like Chrome or Zoom to your Macs, and Fleetsmith would maintain security updates for those apps. This was the main reason we purchased Fleetsmith,” a Fleetsmith customer told TechCrunch.

The customer added that the company described this functionality as a major feature in a company blog post:

Fleetsmith handles this all for you automatically. Once the version is enforced, it is downloaded and queued for install immediately across the device fleet. Most apps will update silently and automatically once they’re restarted, but users can also choose to do the update manually. Our agent will remind users about the update periodically, and then once the enforcement date hits, it will give them an opportunity to save work and then run the update itself.

Apple has acquired Fleetsmith, a startup that helps IT manage Apple devices remotely

As it turned out, in an email to Fleetsmith customers on the day of the transition Apple had made it clear that it was discontinuing this feature. The email included links to several help articles that were supposed to assist admins with the transition. (The email is included in full at the end of this article.)

The general consensus among admins that I spoke to was that these articles were not terribly helpful. While they described a way to fix the issues, they said that Apple has turned what was a highly automated experience into a highly manual one, effectively eliminating the speed and ease of use advantage of having the update feature in the first place.

Apple did confirm that it had responded to some help ticket requests after the changes this week, saying that it would soon restore some configurations for Catalog apps, and was working with impacted customers as needed. The company did not make clear, however, why they removed this functionality in the first place.

Fleetsmith offered a couple of key features that appealed to Mac system administrators. For starters, it let them set up new Macs automatically out of the box. This allows them to ship a new Mac or other Apple device, and as soon as the employee powers it up and connects to Wi-Fi, it connects to Fleetsmith, where systems administrators can track usage and updates. In addition, it allowed System Administrators to enforce Apple security and OS updates on company devices.

What’s more, it could also do the same thing with third-party applications like Google Chrome, Zoom or many others. When these companies pushed a new update, system administrators could make sure all users had the most recent version running on their machines. This is the key functionality that was removed this week.

It’s not clear why Apple chose to strip out these features outlined in the email to customers, but it seems likely that most of this functionality isn’t coming back, other than restoring some configurations for Catalog apps.

Email that went out to Fleetsmith customers the day of the acquisition outlining the changes: 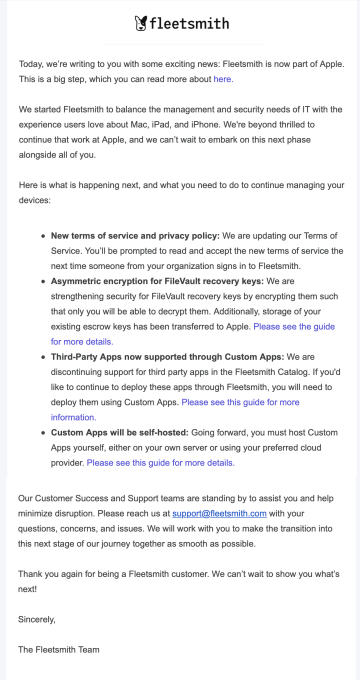 Attempts to reach Fleetsmith founders for comment were unsuccessful. Should that change we will update the article.