Latest data from the Mortgage Bankers Association for the week ending 31 August
– Purchase index 231.4 vs 230.1 prior
– Market index 343.5 vs 344.0 prior
– Refinancing index 940.0 vs 952.9 prior
Headline measures the change in number of applications for mortgages backed by the MBA during the week. Slight dip in mortgage activity in the last week,

The yen is also a bit on the back foot too now
ForexLive
Markets are starting to turn around and that is helping fuel further run in major currencies against the dollar and the yen on the day. The aussie has almost pared all of its losses against the greenback from earlier in the session too.Italy’s FTSE

US equity futures are pointing towards a lower open, with the S&P 500 at risk of a larger pullback, while the Nasdaq 100 eyes support to curb losses.

from DailyFX – Feeds all https://ift.tt/2Cu0cUW
via SYFX+

IG Client Sentimentshows retail are 65% net-long GBPUSD, normally a bearish contrarian indicator. See how changes in this indicator can help you see shifts in trader sentiment and positioning.

GBPUSD continues to drift lower and back towards important short-term support despite a better-than-expected CIPS UK Services PMI report which beat market expectations – 54.3 (actual) vs 53.9 (expectations) and 53.5 (prior). Today’s PMI release points to UK growth in the region of 0.4% to 0.5% in Q3, at least in-line with the 0.4% growth seen in the second quarter.

Duncan Brock, group director at CIPS said that while today’s release pointed to a steady level of activity, “the dark clouds of political indecision are still having an effect and preventing more business activity. Service providers are likely to continue along this vein for the rest of the year until those clouds have cleared.”

A strong US dollar continues to play its part in moving the pair lower, while recent Brexit talk has soured last week’s positivity. The PM’s Chequers plan is now looking dead in the water with ex-UK Brexit negotiator and EU negotiator Michel Barnier now openly speaking about a ‘Canada +’ style agreement or WTO rules.

We have recently released our Q3 Trading Forecasts for a wide range of Currencies and Commodities, including GBP and USD. 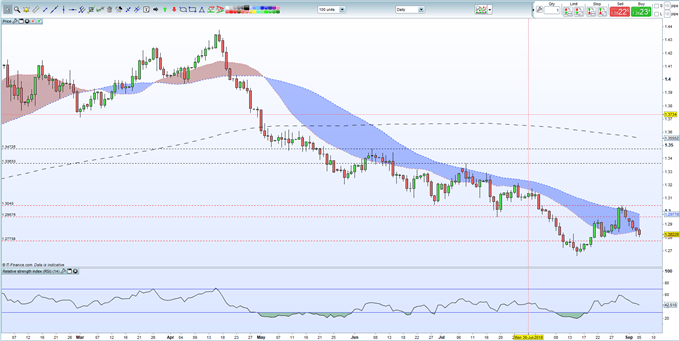 The daily GBPUSD chart above shows that the recent triple-lows either side of 1.2800 need to hold to prevent further negative momentum and a re-test of the August 15 low at 1.2662. GBPUSD currently trades below all three moving averages and shows a negative pattern of six lower high/lower low candles in a row.

DailyFX has a vast amount of updated resources to help traders make more informed decisions. These include a fully updated Economic Calendar, and a raft of Educational and Trading Guides

EUR/USD appears consolidative in the near term in light of the choppy activity in open interest, although the acceleration in volume could prompt a deeper retracement to, initially, the 1.1508 level.

The GBP/USD pair held on to its weaker tone, albeit once again managed to find some support near the 1.2800 handle post-UK services PMI.

After an initial uptick to an intraday high level of 1.2870, the pair met with some fresh supply and was being weighed down by resurgent US Dollar demand. This against the backdrop of fresh Brexit jitters kept exerting downward pressure for the fifth consecutive session.

The selling pressure abated following the release of UK services PMI, which bettered expectations and helped snap a slew of disappointing UK macro data this week (manufacturing and construction PMIs). In fact, the final Markit UK services PMI rose more than expected to 54.3 in August and provided a minor lift of around 20-25 pips to the major.

However, the post-data minor bounce lacked bullish conviction/any strong follow-through and held the pair within striking distance of breaking below the 1.2800 round figure mark to confirm a fresh bearish breakdown.

A convincing break below the mentioned handle is likely to accelerate the fall towards 1.2765 intermediate support before the pair eventually drops to challenge the 1.2700 mark. On the upside, any recovery attempts might now confront fresh supply near mid-1.2800s, above which the pair is likely to aim towards reclaiming the 1.2900 round figure mark.