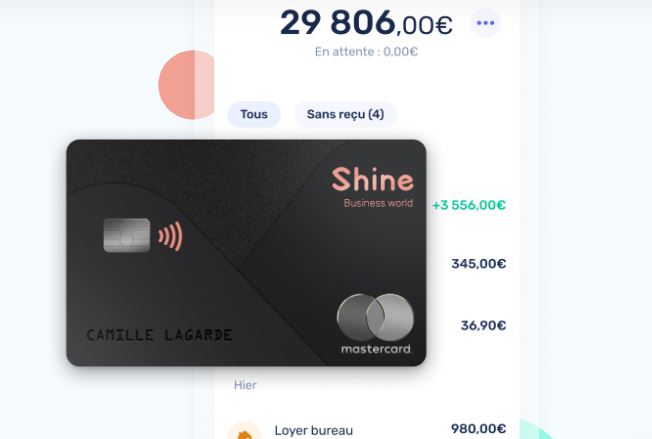 The size of the acquisition is currently unconfirmed. TechCrunch reports an all-cash deal of around €100 million ($112.6 million) but has since updated its report to say Société Générale has disputed this price.

The fintech runs on Treezor, the banking-as-a-service (BaaS) subsidiary of Société Générale group

TechCrunch sources also say that the bank is paying in tranches which will eventually make up €100 million.

Shine offers business-tailored accounts and debit cards. French customers can create invoices directly from the app and send payment links to clients. Invoices then get automatically marked as paid in the app.

Users can also set up notification reminders to pay taxes and see how much money will be left over.

The fintech runs on Treezor, the banking-as-a-service (BaaS) subsidiary of Société Générale group. To date, it has gathered roughly 70,000 customers in freelancers and small businesses.

It has also landed roughly €10.8 million ($12.2 million) in funding from backers including Daphni, Kima Ventures, and XAnge.

Shine will operate independently from Société Générale but will likely cross-promote offerings with the bank. This could see each firm referring business clients to the other.

The start-up’s co-founders will remain heads of Shine. Co-founder and CEO, Nicolas Reboud, says that the acquisition will see the fintech expand offerings around credit, insurance, and payments.

Société Générale’s French retail banking director, Marie-Christine Ducholet, says the start-up appealed to the bank because it fitted in to its “people and digital technology” mix.

The director also cites – without going into any detail – the potential open banking opportunities which could come out of the acquisition.

Another recent play by Société Générale

In June, the bank launched a new free account called Banxup for teenagers. It connects to their parents’ pre-existing accounts with the bank.

“We started from the observation that the apps of neobanks and network banks are very similar while their models are very different,” Ducholet said upon launch.

She added that the bank wanted “a model based on close relationships and the expertise expected by customers who have chosen Société Générale”.

As of May, the bank said it has been acquiring 3.5 million digital clients a month. Though the bank does not clarify how many of these are existing customers transitioning to digital, and how many are net-new customers.